I asked Dr. Ferdz … which weekend are you free to give out the chairs? The only date that matched in our calendar was 12th of August, Sunday.

I accepted because she’s very hard to catch and she’s an essential member of the team in my plan to finally give away most of the Wheelchairs-for-Kids that has been sitting in our storage for a little over 3 years now. She’s the wheelchair expert while I, handle the rehabilitation part of the process.

At the same time, I was selecting the kids that can use the wheelchairs. I only have on criteria – that they can sit with minimal support.  I tried to be strict because there are very few chairs to give to the number of children that needs them.  These are wheelchairs that are fitted and modified to the individual needs of the user.

All that preparation was done remotely. It was easy, I had years of training working in Palestine and Turkey!

The coordinator Miss Holly gave me the information about the kids she recommended. I selected them based on the photos and passed on to my colleague to confirm.  Once we had the list, we were all set to roll the coming Sunday.

A little sacrifice for a slice of heaven

Thanks to a friend, I was able to link and communicate with a group of advocates who will do anything and everything for their children with cerebral palsy.  The seven kids we chose are of the mixed type of cerebral palsy, the youngest is a 3-year old, and the oldest was a 7-year old, all non-verbal and comes with their unique temperament.

The group is called CPCARES.Ph, a newly minted NGO composed of mostly mothers who met each other in hospitals and rehabilitation centers where they get treatments. They decided to bond together and exchange information on how to support their children and each other and eventually get support like the wheelchair-for-kids I was offering.

The chair has to go, it’s long overdue

The wheelchair-for-kids was given to me by a colleague from Rotary (WFK, Inc) in Australia. I collected them in Pampanga in 2014 to give to ten children in San Pedro. But life happens to my colleagues and to me (that’s for another story) that we didn’t get the chance to complete the donation of the chairs. I only gave one, and 9 other was stored between my house and another friends’ backroom until I find the time to give them out.

Then my accident happened this year, and suddenly I found myself with nothing worthwhile to do, I started reconnecting with my disability network. During one of my doctor’s visit, I dropped by one of the social department run orphanages (Elsie’s Gatches) in Alabang and tried to find kids that can benefit the chair, we were able to find only one.  The residents are either too old, too big or the disability is severe they cannot control their movements let alone sit without restraints.

After some time, through the mother of Gab, our very first recipient, she got me in touch with CPCARES.Ph and the rest as we say “is history.”! (Read Gabs’ latest story here)

As the day of the activity approaches, a severe weather situation started happening in the metro including our province. The typhoon #Karding, though far from land was sucking the monsoon bringing in non-stop rain, and it’s putting my plans at risk of getting delayed again. I thought if I cannot give the wheelchairs away this time, I will not be able to do it ever!

I became friendly with the disaster alert, and the worst is yet to happen.

The day before the event, on a Saturday, I attended a creative writing course that puts me in the heart of EDSA, our infamous parking lot. And the day prior, I was with friends, and there was no problem with rain, but anything can change typical for this period, so I was confident the weekend will be good.

When I arrived at the workshop venue, the rain had started. I was not worried it doesn’t seem to be strong, I was wrong. At around 2 in the afternoon of Saturday all the mobile phones in the room gave out a unison fog horn sound announcing that the whole of Metro Manila and nearby provinces are on RED Typhoon Warning – it was not good.  There is more rain dropped than what can be handled by the cities and provinces – the worst flooding was imminent.

I managed to go home later that afternoon, risking walking in the rain and puddles and running after buses because I will have to get ahead of the situation.  Had I delayed even for 10 minutes I would have slept in one of the hotels nearby and not go home for the event. 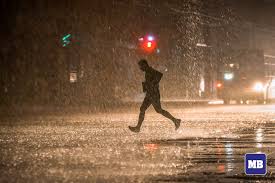 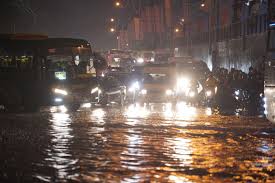 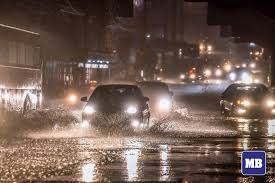 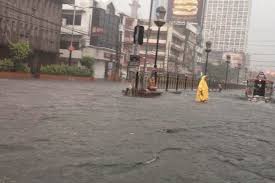 (Photos above are from the internet – it was what I escaped when I decided to hop in the bus to go home).

I was also on high alert. Continually checking the weather report and updating the coordinators.

My colleagues whose coming from the metro contacted me asking if the event is pushing through because people are being evacuated as the night progressed and there was a risk of the dam breaking or one of the big river overflowing if the rain continues overnight threatening more flooding.

All through the night, I was glued to the news telling people that if the situation doesn’t change I will advise postponing no later than 5.30 in the morning of Sunday. I was praying hard before sleeping, praying that when I check the news, I will have good news.

Good news indeed, the sun had shown its face … finally!

I knew it, the moment I woke up, I know it’s a go. The RED warning was lifted, but it left significant devastation in the whole of the metro, where half of the kids and my colleague was coming from.

At 5 the next morning

With God’s providence, all came, and nobody was affected by the massive flooding even if they lived in the area that was underwater. God really want these kids to get rolling in their new chairs, rain or shine.

One by one they arrived at the venue, and one by one the chairs were assembled. All hands were on deck, anticipating 3-hours each chair including fitting and adjustments, we needed to hustle.

After assembly, each kid was fitted in the chair while adjustments were made by mostly their dads. The moms were busy taking care of their kids until they are needed to sit and fit in the chairs.

being fitted in the chair

Since the venue that was lent to us, thanks to another friend, was indoor we were not affected by the afternoon rain that continued to pour. It was less troublesome than it was the day before, and each one of them brought their own transport I was not worried they cannot go home with their chairs or get the chairs wet.

We finished in good time and was able to give out all the seven chairs without a hitch and immediately they were a hit to the kids and especially to the parents who witnessed the transformation of their child the moment they sat in their new and appropriate Wheelchair-For-Kids.

I think God was happy with what we had accomplished that day that the rain stopped altogether after.

Global Issues Through the Eyes of Women